Five Ways That Farmers Control Pests Other Than With Pesticides 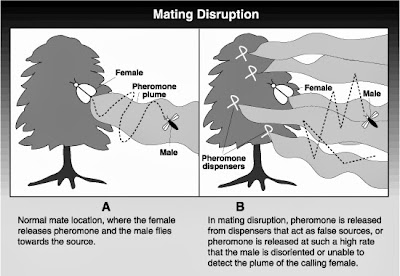 This of course requires irrigation, but if that is done with subsurface drip , weed growth is also largely avoided (see below). Another good example is the potato industry which is in the San Louis Valley of Colorado surrounded by high mountains. This isolates the crop from aphids and the viruses they spread and is particularly good for seed potato production. 2. Finding Genetic Resistance Wheat stem rust is a potentially devastating disease that was successfully controlled using genetic resistance for several decades One of the reasons for a concerted effort to maintain extensive seed banks is to maintain the genetic diversity in a crop which may include resistance traits to various pests. For instance, when the resistance to wheat stem rust was finally overcome by the UG99 strain of that fungus, wheat breeders went to the seed banks to find a new resistance gene and have been cooperating internationally to get that trait bred into the myriad types of wheat grown around the world. There are also often genetic solutions for soil-borne pests which involve grafting the desirable type of a fruit or vegetable onto a rootstock that provides resistance. This is most commonly used for perennial crops, but in recent times this sort of grafting for genetic resistance is also being used with tomatoes , cucumbers and even eggplants. Genetic engineering provides a means of using genetic pest resistance in situations where ordinary breeding for such a trait is either impossible or far too slow. For instance there is a gene for resistance to a bacterial disease of peppers which has been moved to tomatoes making them resistant to that same bacterium. Potatoes are difficult to breed, but by transferring a gene from wild potatoes from the Andes, disease resistance has been moved into modern, commercial-type potatoes (see below). Potatoes genetically engineered to resist late blight using a gene from their wild relatives Breeding resistance to coffee rust is possible, but doing that with conventional breeding methods will not be fast enough to help the small-holder coffee farmers whose way of life is now threatened by that disease. Unfortunately, the rich world part of the coffee industry has elected not to use genetic engineering to speed up that process. 3. Modifying The Climate Wine grape growers often use trellising methods and removal of lower leaves to change the microclimate where the grape clusters are developing. This helps to prevent a fungal disease called “Botrytis bunch rot.” There are a whole range of growing practices called “protected culture” that range from a simple rain shield to a passive greenhouse to a high-tech greenhouse with complete climate control. These measures provide relief from certain diseases that would otherwise be fostered by rain. In some cases the system excludes insect pests all together (see below). Although this approach is too capital-intensive for many crops, it is very effective for high value vegetable and fruit crops and this is a rapidly growing segment of agriculture around the world. Tomatoes grown without soil and protected from insect pests 4. Disrupting The Pest’s Life Cycle Perhaps the most common way that pests are controlled in annual crops is through the use of crop rotation. For instance, corn is typically rotated with soybeans throughout much of the midwestern US. This prevents population increases of certain pests because every other year certain pests don’t have a suitable host available.
For the original edition along with any sort of extra images or videos, pay a visit to http://www.science20.com/agricultural_realism/five_ways_farmers_control_pests_other_pesticides-127013

This Post is by John C., you can learn more about them by visiting http://www.pestcontrolglendaleaz.org/spider-control-extermination-glendale-az.html. If you’re getting a scorpion, spider & roach extermination service one can also look at visit our website.

Copyright © 2015 Your Company. All Rights Reserved.

Powered by WordPress. Theme by Arinio